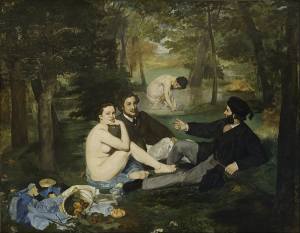 Impressionism and Post-Impressionism have been called a fight about form and function in art. Impressionism was a painting style concentrating more on color and the representation of things in the real sense. Post-Impressionist painters gave a lot of importance to the emotional aspect of human behavior, and little importance to the appearance of the subject. The Impressionists began by using Edouard Manet’s technique of painting with bright colors, without regard for shadows, and by painting outdoors rather than in a studio. Painters used thin visable brushstrokes, concentrated on portraying light, and displayed ordinary subject matter. Paul Gauguin, one of the fathers of Post-Impressionism, believed that the ability to choose colors, rather than copy nature, was part of the artist’s power. Post-impressionist painters used vivid colors, a bold application of paint, and portrayed real-life subject matter using geometric forms and unnatural colors. Impressionism paved the way for other styles including Cubism and Fauvism, while Post-Impressionism paved the way for Modern Art. To view art from this period, visit http://on.fb.me/1ttgFch 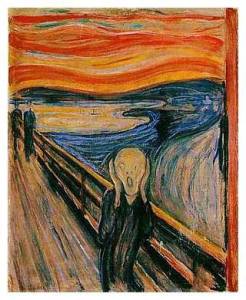 Expressionism originated in Germany at the beginning of the 20th century. It was a period where artists sought to portray meaning or emotional experience in order to evoke a mood or an idea. It was a reflection of the artists’ perspective, substituting the visual reality of an object with their own interpretation to represent its meaning. Artists used distortion and exaggeration for emotional effect. Unlike Impressionism, its goals were not to reproduce the impression suggested by the surrounding world, but to strongly impose the artist’s reaction to the emotion stirred by the subject. Characteristics included highly subjective subject matter that was personal and spontaneous, distorted, exaggerated, and primitive, vivid, jarring, and sometimes violent. To view art from this period, visit http://on.fb.me/1sLUAIs. 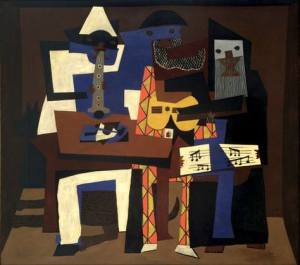 Cubism, pioneered by Georges Braque and Pablo Picasso, began around 1907, and has been considered the most influential art movement of the 20th century. It was the first abstract style of modern art. Cubist paintings look at subjects in new ways in an effort to depict three-dimensions on a flat canvas. Drawing on the expressive energy of art from other cultures, particularly African, Micronesian and Native American art, artists were intrigued and inspired by the stark power and simplicity. Similar to art from Ancient Egypt, Cubists wanted to show the most important parts of the things they painted. There were 2 stages: Analytical Cubism (artists analyzed the subject and broke it up into different blocks, looked at the blocks from different angles, then reconstructed the subject, painting the blocks from various viewpoints) and Synthetic Cubism (artists began to add in colored paper, newspapers, and other materials in a collage.) Popular subjects for Cubism included musical instruments, people, bottles, glasses, and playing cards. There were very few Cubist landscapes. To view art from this period, visit http://on.fb.me/1rx3o6a 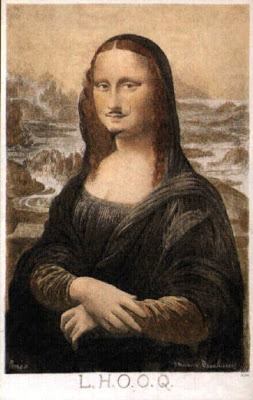 Dada was born out of a negative reaction to the horrors of World War I, and was based on the belief that the ‘reason’ and ‘logic’ of bourgeois capitalist society had led people into war. It was a rejection of reason and logic, focusing, instead, on nonsense, irrationality and intuition. Dada artists helped influence later movements including Surrealism, Pop Art and Fluxus. Dadaists were fed up. If society was going in a direction that included war, they would have no part in it or its traditions, especially its artistic traditions. Dada artists referred to themselves as non-artists and their work as non-art. Dadaists meant for us to rethink the items that surround us so that we might rethink our world. To view art from this period, visit http://on.fb.me/1p8AaCJ 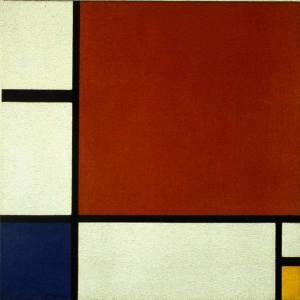 The Abstract Expressionism movement began in the 1940s in New York City following World War 2. What is interesting about this is that, prior to the second world war, Paris had been the center for new modern art trends. Afterwards, NYC emerged as the major center for artists. Abstract Expressionism is art made up of lines, shapes, and colors, having no recognizable object. The Abstract Art movement is called Abstract Expressionism because, although the art has no subject, it is still trying to convey some kind of emotion. Some artists had theories on the emotions that were caused by certain colors and shapes, planning out their paintings to the last detail. Other artists painted with emotion and randomness hoping to capture their emotion and subconscious thoughts on the canvas. To view art from this period, visit http://on.fb.me/1AXrAiU 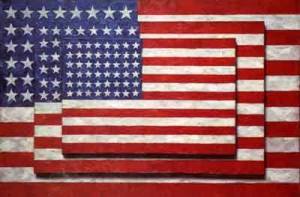 Pop Art is art made from images and icons that are popular in the modern world, such as product labels, advertisements, comic books, and celebrities. It was a reaction to the seriousness of Abstract Expressionist Art. Though considered similar to Dada due to its utilization of found objects and images, Pop Art differs in that it replaced Dada’s destructive, satirical, and anarchic themes with a detached glorification of the artifacts of mass culture. Subject matter was no longer the traditional “high art” themes of morality, mythology, and classic history. Pop artists celebrated commonplace objects and people of everyday life, in this way seeking to elevate popular culture to the level of fine art, and has become one of the most recognizable styles of modern art. To view art from this period, visit http://on.fb.me/1lkGRXf
https://erinsweeneydesign.com/wp-content/uploads/2014/08/10541397_814345751938780_7815037634690581642_o.jpg 796 1024 Erin Sweeney https://erinsweeneydesign.com/wp-content/uploads/2019/09/ESD-logo-for-website.jpg Erin Sweeney2014-08-30 07:37:342015-03-21 07:11:46The History of Art in One Minute Lessons: Part 3
0 replies

The History of Art in One Minute Lessons: Part 2

Time to move over to Google+
Scroll to top