For thousands of years, Evergreen Fir trees have been used to celebrate both pagan and Christian winter festivals. The use of Fir trees as Christmas trees began in northern Europe about 1000 years ago. It’s believed that the 16th century German preacher, Martin Luther, was the first to bring the Christmas tree inside the house. In those days, Christmas trees were decorated with edible items such as gingerbread and gold covered apples. Later, glass makers began to make small ornaments, much like the ones we use today, to be hung on the tree. Around the 1830s, Christmas trees were first introduced in Britain, quickly becoming very popular. During Victorian times, candles were lit and placed on trees to represent stars. This is still done in some parts of Europe today, though the risk of fire deters many from using flaming candles. Luckily, American telephonist Ralph Morris invented electric Christmas lights to replace candles in 1895, making them the safer way to make a Christmas tree sparkle.

There are various explanations as to why we place decorations on a Christmas tree every year. Some say it began when people used to decorate winter trees outside their homes after the leaves fell. They worried that when leaves fell from the trees, the spirit of the tree abandoned it, and without the spirits, the tree would no longer survive. Adding ornaments made the tree beautiful and attracted the spirits once again. Many Christians believe that Christmas trees are decorated with symbols and ornaments to give spiritual meaning to the tree: the star on the top represents the star of Bethlehem that led the three wise men to the stable where the baby Jesus was born; lights on the tree represent the stars that twinkled in the night sky during their journey; tinsel is the sparks of the fire that Joseph lit to keep Mary and Jesus warm; candy canes on a tree represent the Shepherds staff, as a Shepherd was there to witness the birth of Jesus, and so on.

In most homes today, our Christmas trees are covered with far more than lights, tinsel, and candy canes. Most Christmas trees display a collection of memories of our lives. Everywhere we go, we can purchase some sort of ornament to add to our collection. Ornaments from vacations we shared as a family. Special occasion ornaments for graduates or when we purchased a new home. “Our First Christmas Together” ornaments. We clutter our trees with handmade ornaments of small photos of our children from each school year, colored and decorated with their own little hands. We have ornaments representing our favorite sports teams and tv characters. Pretty much anything that we have ever liked or has ever happened to us can be showcased on our Christmas tree each year. Yet, in every home where there stands a beautiful Christmas tree, there are also at least two or three ornaments that really stand out. These are the ones that, upon unpacking them year after year, always spark a most precious memory or feeling in us. While I adore the handmade ornaments my children have created over the years, and I love the commemorative ornaments that make me recall a special time in our lives, I am lucky to have three ornaments that I truly treasure.

A Few Treasures From My Tree

I didn’t know my paternal grandmother for very long. I was in elementary school when she suddenly died of a stroke while tending to her garden when she was in her mid-60s. However, the memories that I do have of her are of a tall smiling German woman with thick glasses and wavy gray hair. I remember her chuckle, and how she always had cookies for us. I remember the old German Cuckoo clock that hung in her kitchen. I remember the McDonalds glasses in her cupboard that she had because she knew her grandchildren enjoyed drinking from them so much. I remember her sitting in her recliner reading the paper. And I remember her every year when I unpack this ornament. The mirror angel. My grandmother had traveled to Germany and brought back this angel ornament. This ornament is the only thing I own that was once hers. It’s a bit beat up after more than 40 years of being handled, but it’s still the most beautiful angel I have because it belonged to someone special in my life. I missed growing up with Grandma Phelps, but at least I have this ornament to bring to life the memories that I have of a very special woman. 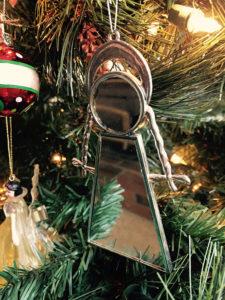 I remember making this stick horse ornament when I was 10 years old. My 5th grade teacher, Mr Hudson, helped us as we painstakingly rolled the dough into the horses mane, crafted tiny balls for eyes, and stuck the horses head onto a stick before it was shellacked. I remember a teacher assistant neatly printing my name for me. I wanted this ornament to be perfect because it was a gift for my mother for Christmas. As I grew up, I was the one who would hang this ornament on my family’s tree each year. I’d recall Mr Hudson and my classmates from 5th grade in the early years. Later, I still remember Mr Hudson, though faintly. Yet, I look at this ornament, as it’s slowly cracking from the years, and it takes me back to my childhood. I’m amazed that it has lasted as long as it has. I fear the day when I open the box of ornaments and find that my horse has finally fallen apart. I ask my children to be especially careful when hanging my stick horse on the tree. It is one of the most treasured ornaments that I own. 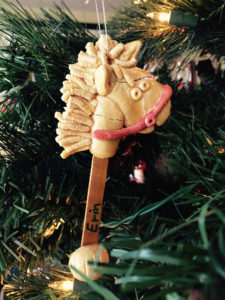 I met Berni (short for Bernadette) Garvey when I was 7 years old. We met on the first day I walked into a brand new school and instantly became friends. Berni was the class clown. She was full of life, easily the funniest person I knew, and a true friend from the start. In middle school, Berni’s family moved to another town, but we continued to stay close. One Christmas, she gave me this Schroder ornament. Like most kids I liked the Peanuts, but didn’t understand why she gave me Schroeder. However, I  joked that Schroeder and Berni had the same smile. They each had that big wide grin. Later, just as we were beginning high school, her family moved from Maryland to North Carolina. I was devastated. I thought I would never see Berni again. We cried and promised to write each other all the time. We wrote often the first year of high school (this was before cell phones and email.) Though as we went through our high school years, we corresponded less and less. We touched base again near the end of high school when she sent me her senior year picture and I sent her mine. We discussed college and our futures. Though we had spent many years apart, I always felt that Berni would be a life-long friend. But I soon learned life often takes unexpected turns.

It was the start of the summer after my first year of college and I had gone away for the weekend with a few friends. I returned to find my mother and sister sitting on the couch waiting for me, both visibly upset. My heart sank. I instinctively thought something had happened to my grandmother. She was the oldest person in the family. I asked if she were ok, dreading the answer.

“Her sister called here yesterday.” I froze. My mother quickly explained that Berni had been at a party on a rooftop at her school. Her friends were sitting near the edge of the roof. As she walked toward them, she stumbled on some loose rocks and fell three stories. She lay in a coma for days but never woke up. Just like that Berni was gone forever. The months that followed I walked around in a daze. Utterly shocked, shaken, and completely devastated at the loss of my oldest friend.

When Christmas came that following December, I opened my mother’s box of Christmas tree ornaments and there he was. Schroeder. The silly Peanuts ornament I had for years was there with his happy smile. Berni’s smile. She passed away when we were only 19. Now, 30 years later, Schroeder continues to sit on my tree, playing his piano. Every year when I take him out of the box, I think of my friend. I am so blessed to have him. 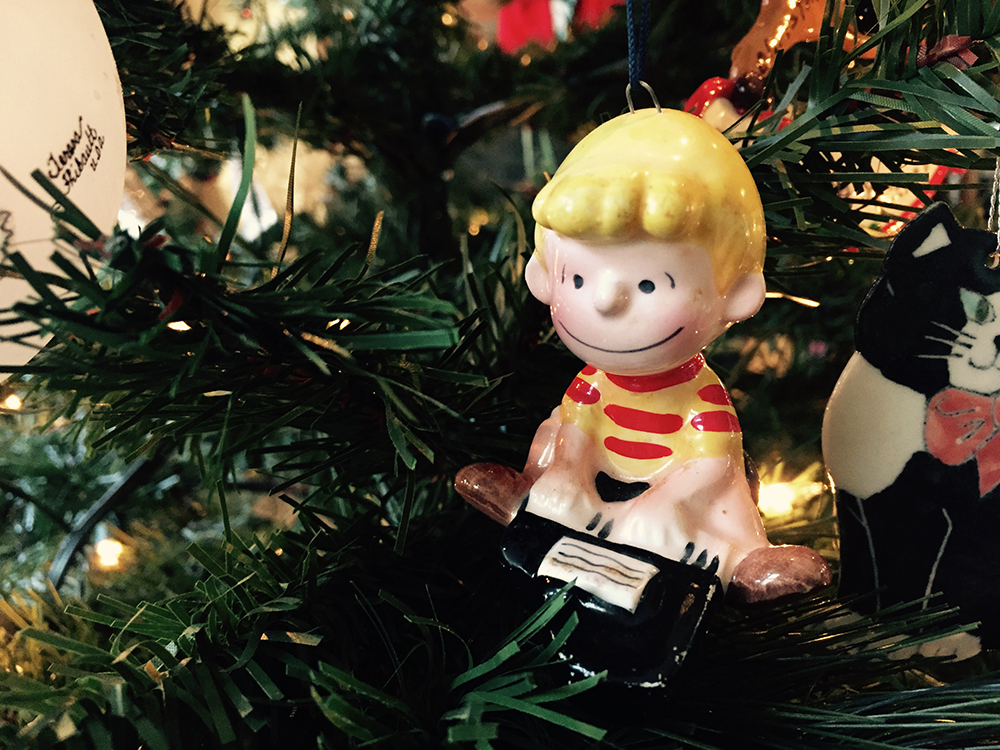 Though I love watching Christmas specials, driving through neighborhoods around town to see the twinkling lights, taking the kids caroling, shopping for the perfect gift, and spending time with family and friends, the most important part of the holiday season to me has always been the decorations on the Christmas tree. As a mother, it’s been wonderful sharing memories with my own children as I watch them hang the ornaments which I hold dear on the tree. It’s difficult to know which ornaments will become the ones we adore the most. Many times, it takes years before we realize their importance in our lives. Yet they are there. Year after year. Bringing memories of those special people and special times in our lives back to us every Christmas season.

A History of the Most Iconic Brand Mascots Since 1877

The History of Santa Claus
Scroll to top