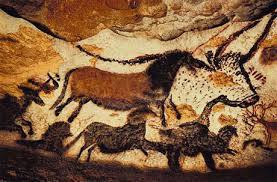 The history of art begins in the Stone Age. Predating writing by almost 27,000 years, art was seen in cave paintings, fertility goddesses, and megalithic structures. The Stone Age consisted of 3 distinct periods: Paleolithic (the earliest human artifacts showing evidence of workmanship with an artistic purpose), Mesolithic (representational image-making, e.g., fertility goddesses and cave paintings), and Neolithic (transition of nomad societies to agrarian in need of permanent shelter; first samples of pottery, architecture and the construction of megaliths). Lascaux Cave Painting, Woman of Willendorf, and Stonehenge are all examples of these first accomplishments in human creativity. To see art from this period, visit on.fb.me/1meWOZW 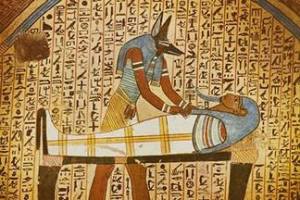 The art from Ancient Egypt shows a heavy focus on the afterlife, with surprisingly little artistic change over the course of 3000 years. Much of the artwork had to do with their religion, and most were never intended to be seen. They were designed to benefit a divine or deceased recipient. The art in tombs was meant to assist the deceased in the afterlife. Another characteristic attributed to the art of Ancient Egypt is the method in which 2-dimensional objects were represented. Each object was rendered from its most recognizable angle. This is why images of people show their face, waist, and limbs in profile, but eye and shoulders frontally. Also, different classes were depicted by scale. Kings were the same size as deities, both being larger than the elite and far larger than the common Egyptian. Luckily, because of the incredibly dry climate, much of the art from Ancient Egypt has survived, though a majority of art was stolen from tombs by thieves over thousands of years. To see art from this period, visit on.fb.me/UYAQTD 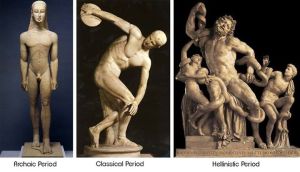 The art of Ancient Greece is usually divided stylistically into four periods: the Geometric (beginning c. 1000 bc), Archaic (7th century bc), Classical (beginning c. 480 bc), and Hellenistic (beginning c. 336 bc).The Ancient Greeks were perfectionists in art. This especially holds true in their sculpture. Little is known about the Geometric, or Greek Dark Ages, period. But during the Archaic Period, we saw sculptors portraying both men and women with similar features, standing stiffly with arms at their sides. Later, during the Classical Period, they sculpted subjects in more relaxed postures and in action scenes. After Alexander the Great conquered much of Asia, Ancient Greek sculptors became influenced by the cultures and people they had conquered. This period is known as the Hellenistic Period, the time when new subjects including women, children, and common people appear in Greek art, and sculptors allowed for their statues to be admired from all angles. 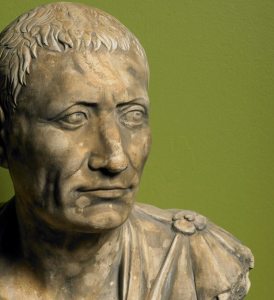 Around 200 b.c., the Ancient Romans began pillaging countries and looting the towns. After conquering Greece, they brought many Greek artists to Rome to make sculptures for them in the Greek fashion. The art of Ancient Greece had a great influence on the art of Ancient Rome. Only after Rome became a dictatorship around 27 b.c. did Roman art develop its own style. Sculpture was considered the highest form of art by Ancient Romans. Original Roman sculptures attempted to portray a real person, typically paying more attention to each person’s distinct face rather than trying to depict the ideal person like the Greek artists did. Most of the early sculptures were of a person or a mythological character, and were primarily used is decorations in public buildings, public parks, and private homes and gardens. One of the most popular types of sculpture in Ancient Rome was the bust. Wealthy Romans placed busts of their ancestors in the atrium of their homes as a way for them to show off their lineage. To see art from this period, visit on.fb.me/1oju6Mo 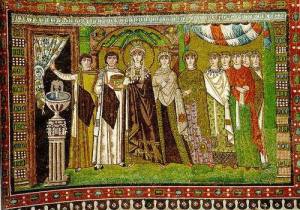 Byzantine Art began as a reflection of the differences between the development of the Catholic religion in the West and the Byzantine Empire of the East. The art was created primarily for the Eastern Orthodox Church and reflected a number of characteristics, including figures being depicted as front facing, one-dimensional, flat objects with no shadows, and long, narrow and solemn faces. There were no sculptures during this time because they were seen as a form of idolatry. Byzantine artists had a disdain for vanity, and sought to represent a spiritual nature. This time is broken down into 4 distinct periods: The Iconclastic Controversy, the Macedonaian Art period, The Sack of Constantinople, and the Paleologus Dynasty. The Iconclastic Controversy (715 AD-852 AD) was a religious dispute where iconoclasts believed artists should not create pictures of Jesus Christ, the Virgin Mary, or the saints. The iconodules disagreed with this belief. The Macedonian Art (843-1025) period lifted the ban on icons. The Sack of Constantinople in 1204 was when Christian Crusaders deliberately destroyed monuments, statues, paintings, and manuscripts – the accumulation of a thousand years of Byzantine Art. Finally, The Paleologus dynasty was a time with increased interaction between Byzantine and Italian artists. The influence of Italian art resulted in Italian-style frescoes replacing the traditional mosaic-work. To see art from this period, visit http://on.fb.me/1r5HIZH
https://erinsweeneydesign.com/wp-content/uploads/2014/08/10574264_804132646293424_5046895926086521256_n1.jpg 182 277 Erin Sweeney https://erinsweeneydesign.com/wp-content/uploads/2019/09/ESD-logo-for-website.jpg Erin Sweeney2014-08-29 19:47:242015-03-21 07:12:49The History of Art in One Minute Lessons: Part 1
0 replies

The History of Art in One Minute Lessons: Part 2
Scroll to top